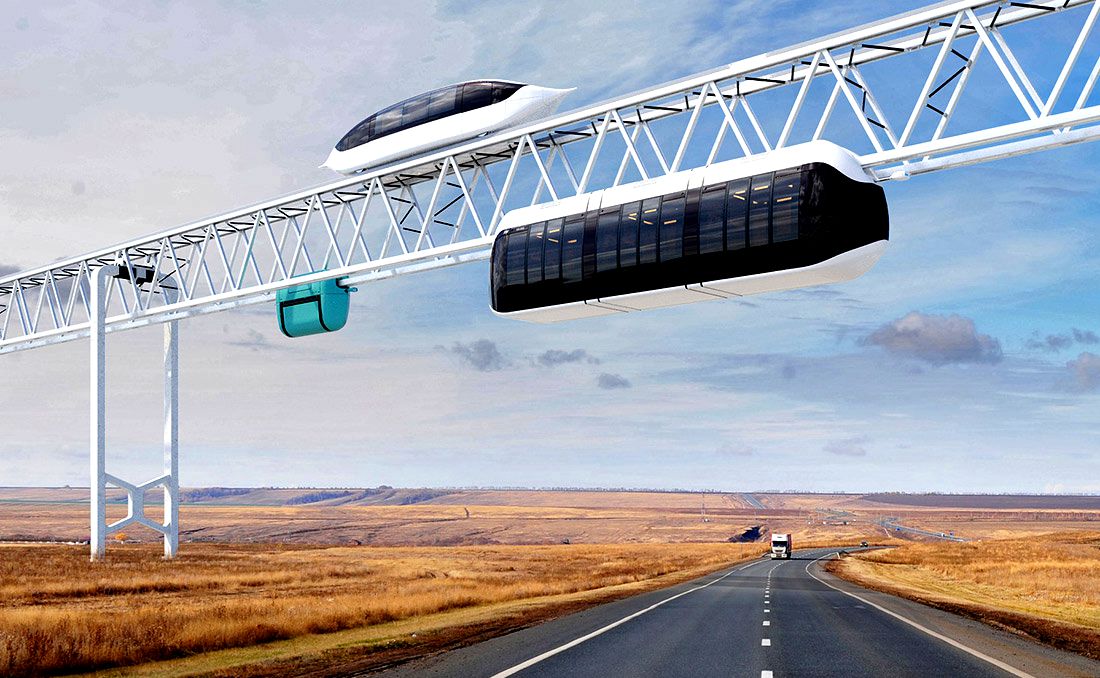 Today we are witnessing how a great idea, which began 40 years ago, materializes at an incredible pace and in the very near future will make many significant changes in the lives of millions of people on earth. If you read these lines, do not remain observers, become participants in a cause that will change a person’s life for the better in all its manifestations!

Today, each of us can buy shares of the SkyWay root company on preferential terms, become its co-owner and provide a worthy future for ourselves, our children and grandchildren in the billion-dollar market of string road construction!

SkyWay is an innovative ecological, safe, comfortable, high-speed (up to 500 km/h), cheap transport in operation and construction with all the infrastructure, based on Unitsky string technologies.

Unitsky's string transport is a special car on steel wheels, placed on prestressed string rails mounted on supports - intermediate and anchor with the formation of spans from 30-40 to 1000-1500 meters or more in length with the entire infrastructure. Due to the high evenness and rigidity of the rail-string track structure, aerodynamicity, and the absence of a screen effect, speeds up to 500 km/h are achievable on STU.

Modern transport has many problems with the transport of goods, passengers, and logistics ... SkyWay moves above the ground on high-strength string rails. No traffic jams: the track structure is located on the 2nd level above the ground. Pollution-free: runs on electricity without polluting the atmosphere. Without borders: can be built in any area with any climate.

SkyWay offers a complete solution for passenger and freight transportation 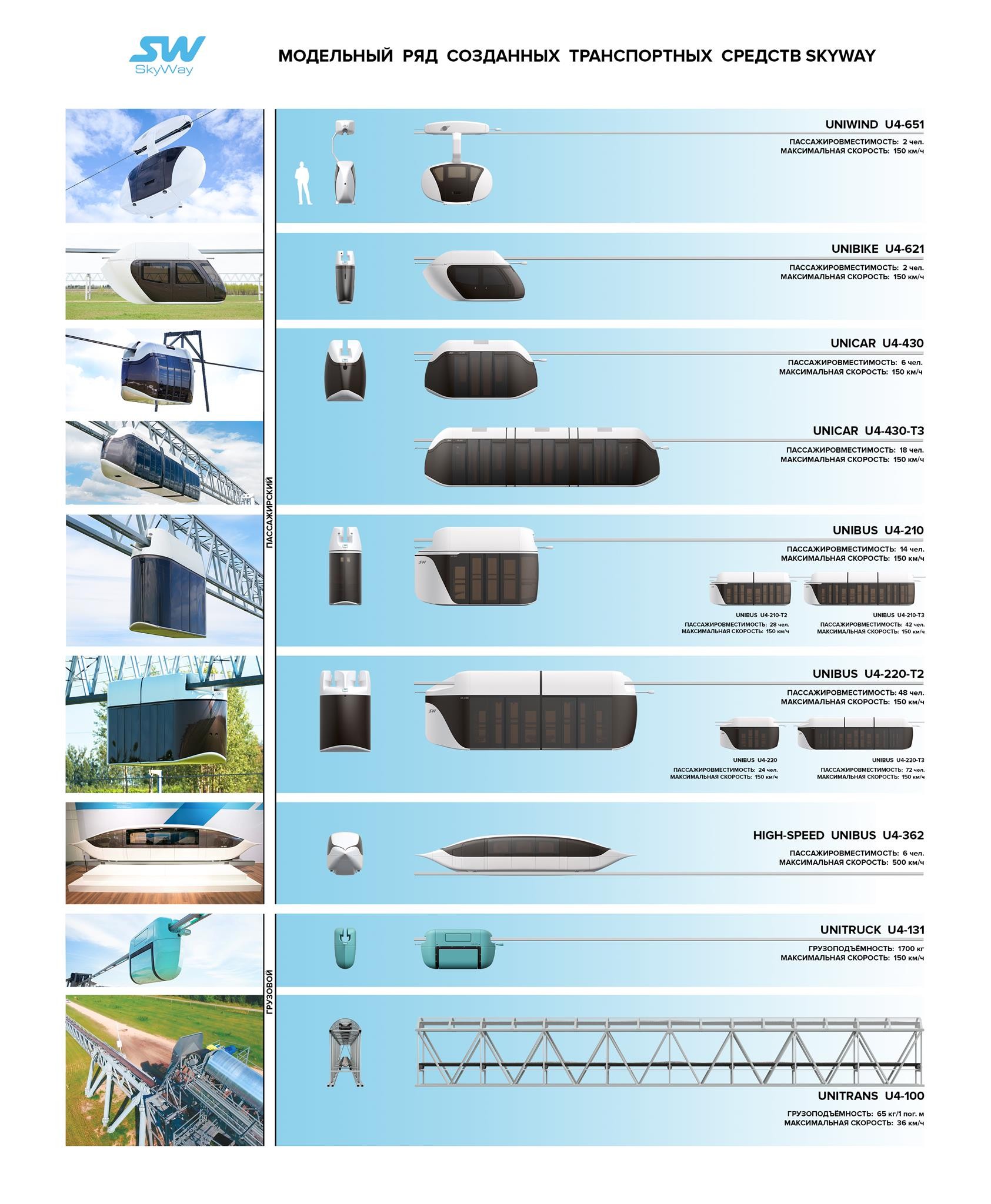 As the project develops, new building materials, new technologies are created, which in themselves are of great value. A string vacuum glass has been developed in which energy costs for heating will be reduced by 90%.

SkyWay String Bridge is an innovative solution for the design and construction of road, rail and pedestrian bridges, overpasses, overpasses and other long transport structures.

SkyWay technology eliminates temperature seams throughout the structures, which increases their evenness, strength and durability, several times reduces the consumption of materials, thereby reducing the cost of structures. 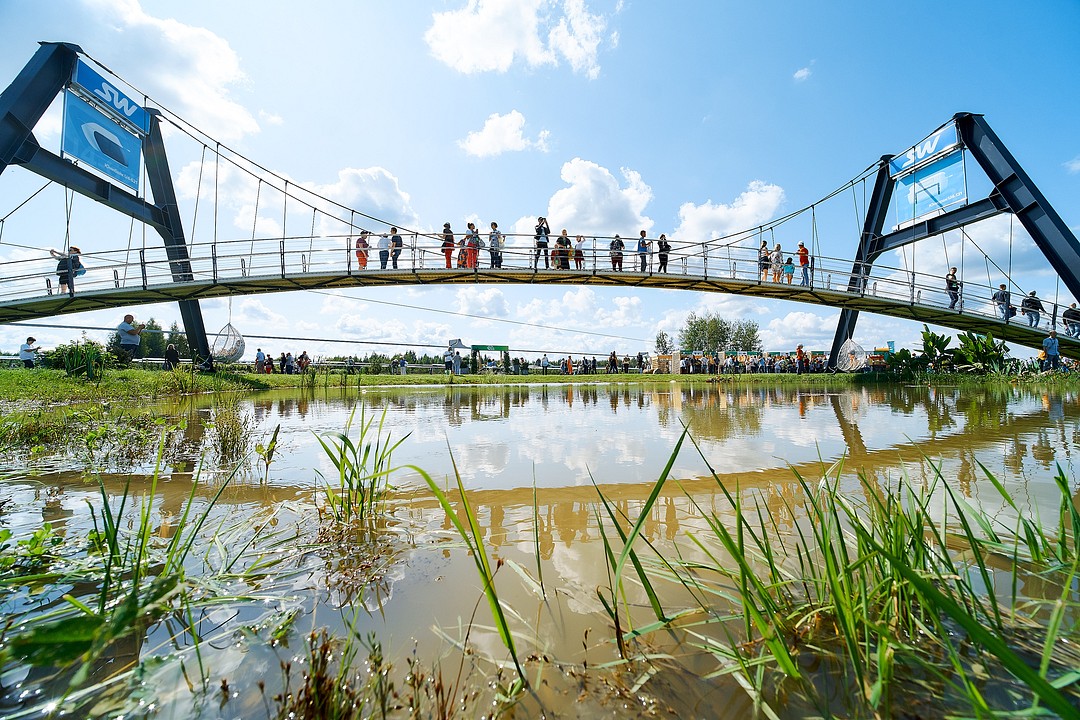 With the development of SkyWay technology, all sectors of the economy will change. Along with the transport system, ecological linear cities will be built. A linear city is a cluster-type urban settlement in which the surface of the earth is intended for pedestrians and green plants, but transport, energy and information communications are located on the "second level" above the ground.

One of the company's activities is the development of SkyWay bio and agricultural technologies. To implement the environmental component of string transport, serious work is being done to restore the fertile soil in the past buried under existing railway, road and other roads (by the way, covering an area of five Great Britain). For this, the company is developing a technology for the production of humus and the cultivation of organic food.

For 40 years, the technology was developed, a set of laboratory, bench, model and polygon tests were implemented. In the summer of 2015, the final stage began - the construction of EcoTechnoPark, a demonstration center for SkyWay technologies, their international expertise and certification, from where innovative technologies will enter global markets. For an incredibly short time, EcoTechnoPark created the infrastructure of the string transport system, organized the production of string transport.

The founder and General Designer of the SkyWay group of companies is the author of string technologies Anatoli Unitsky.

Scientist, inventor and entrepreneur, Academician of the Russian Academy of Natural Sciences, International Academy of Integration of Science and Business, head of two UN projects, member of the Cosmonautics Federation, author of 150 inventions, 18 monographs and more than 200 scientific works.

Already in 1989, Anatoli Unitsky developed the technology of rocket-free space exploration, as the Belarusian documentary film “To the sky on a wheel” tells. Take a look Even then, the scientist warned that we could lose not only our houses, towns and cities, how in its native land after the Chernobyl disaster, but the whole earth, our entire planet for future generations

The Belarusian writer Anatoly Borovsky has written 2 books - “We are Unitsky” and “Unitsky Heavenly Roads”, which tell about the difficult path of a scientist - inventor, about how the main dream of his life was born and gradually realized - the dream of earthly and cosmic heavenly roads, which will radically change the world by preventing an environmental apocalypse.

40 years of development and testing work is today embodied in the SkyWay New Generation Transport System People's Project. Euroasian Rail Skyway Systems Ltd. was established in London in 2013. Today it is a SkyWay group of companies, whose registered capital is estimated by independent experts at $ 400 billion.

In May 2014, a Design Bureau was created in Minsk. A strong team of employees has been created - like-minded people, designers, engineering specialists, the number of which today exceeds 1000 people. An own modern production and office complex has been created.

A model of a two-level landing station, a station for automated loading and unloading of a freight route was built. Intelligent string fencing and string bridge erected.

The production base has been created. Now SkyWay has its own high-tech production, its capacity will allow to realize the first orders for the construction of tracks and the entire SkyWay transport infrastructure. SkyWay factories use Haas equipment, Dassault Systèmes software, and other most efficient and advanced equipment.

Thousands of people from all over the world come to the annual EcoFest to see live the latest SkyWay developments, to meet like-minded people. 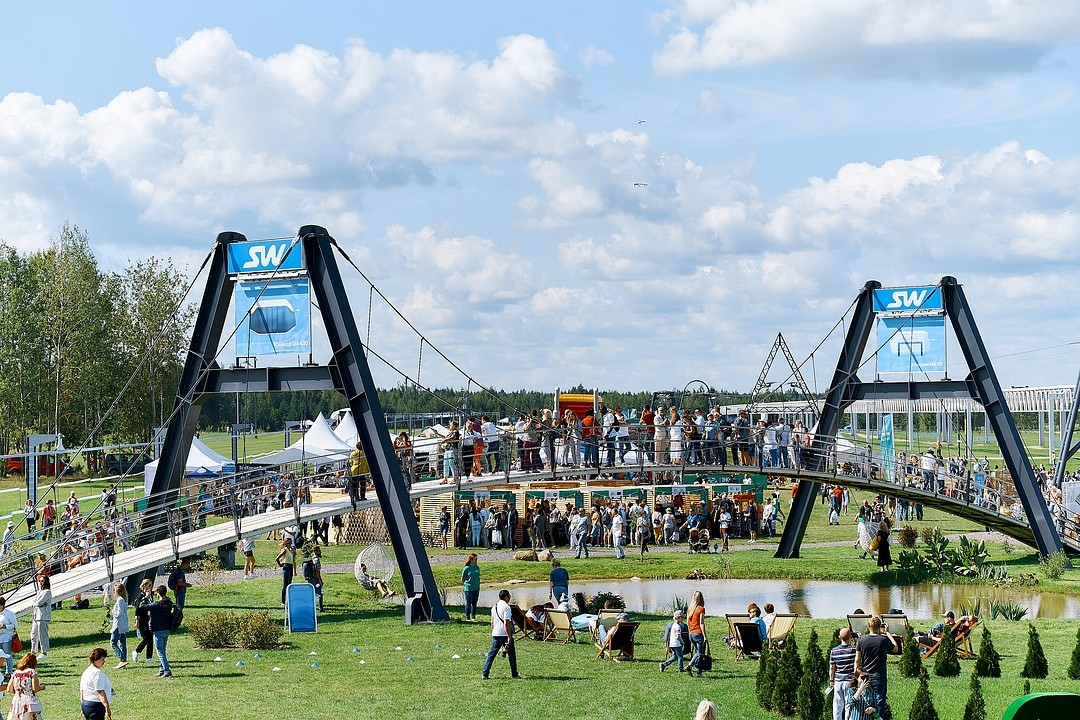 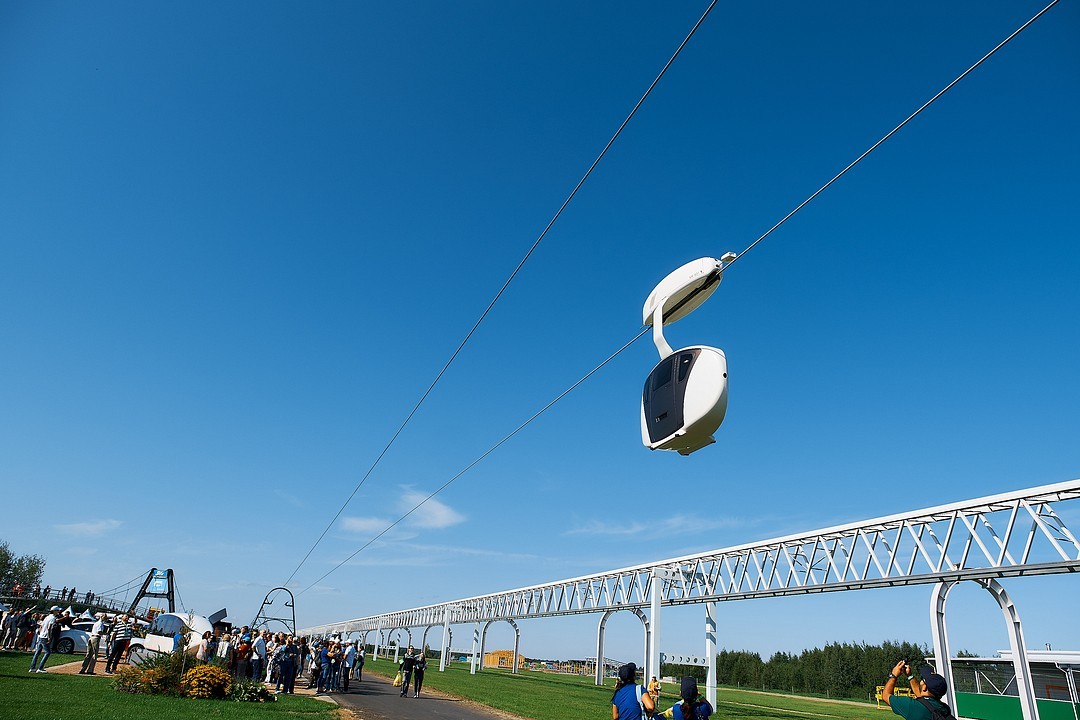 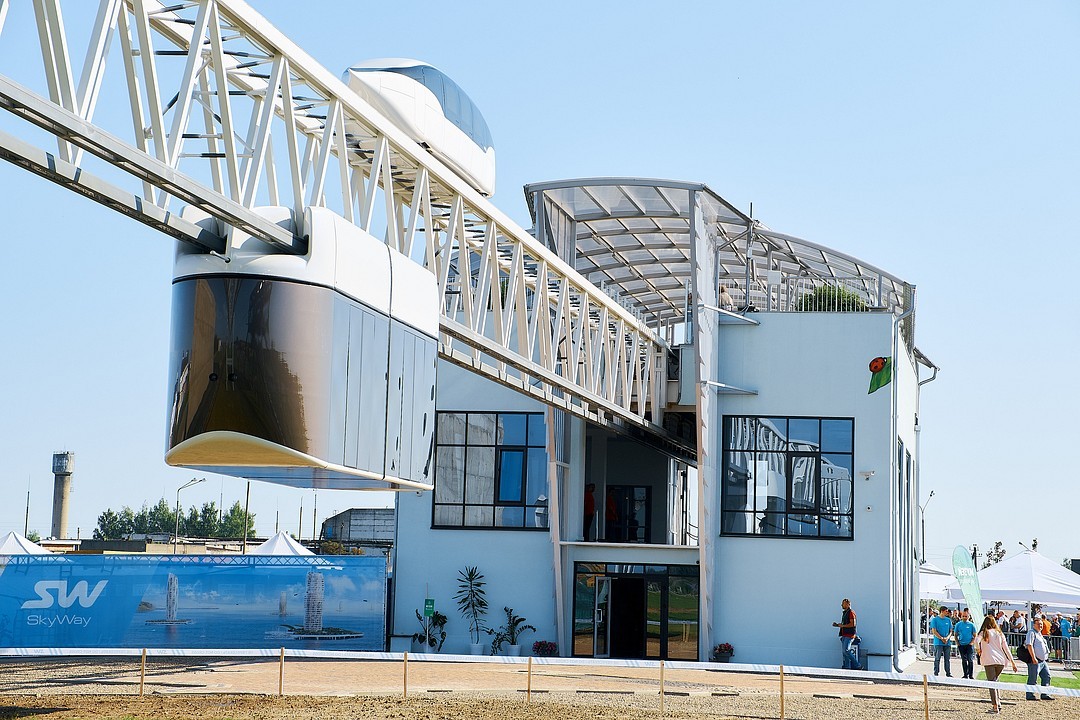 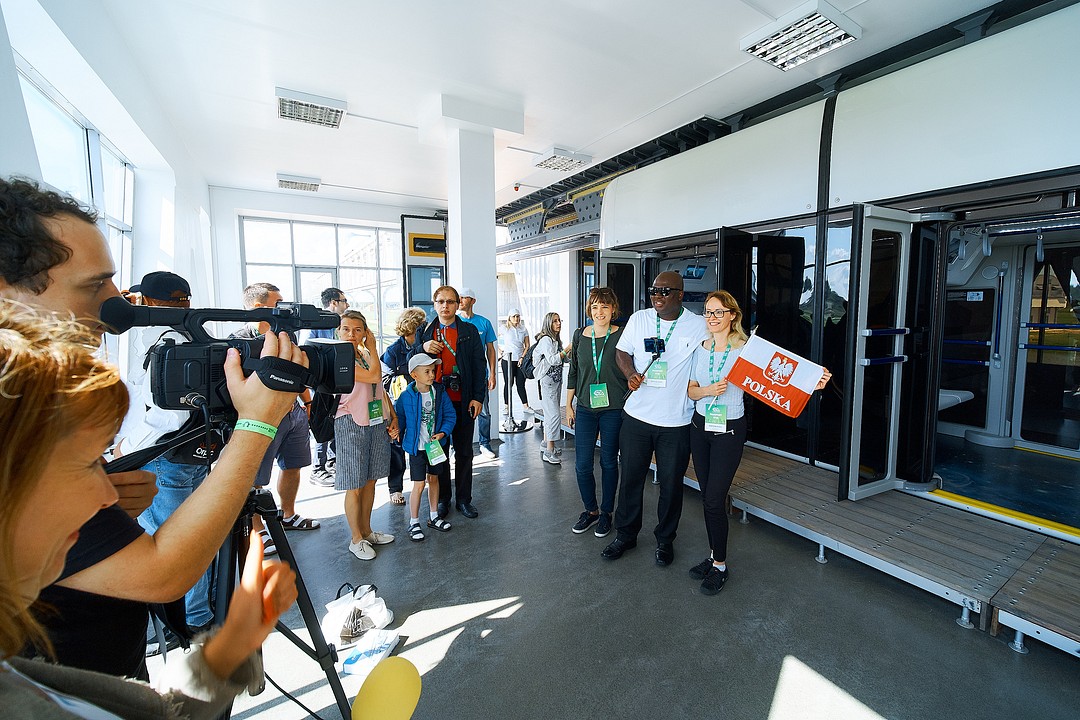 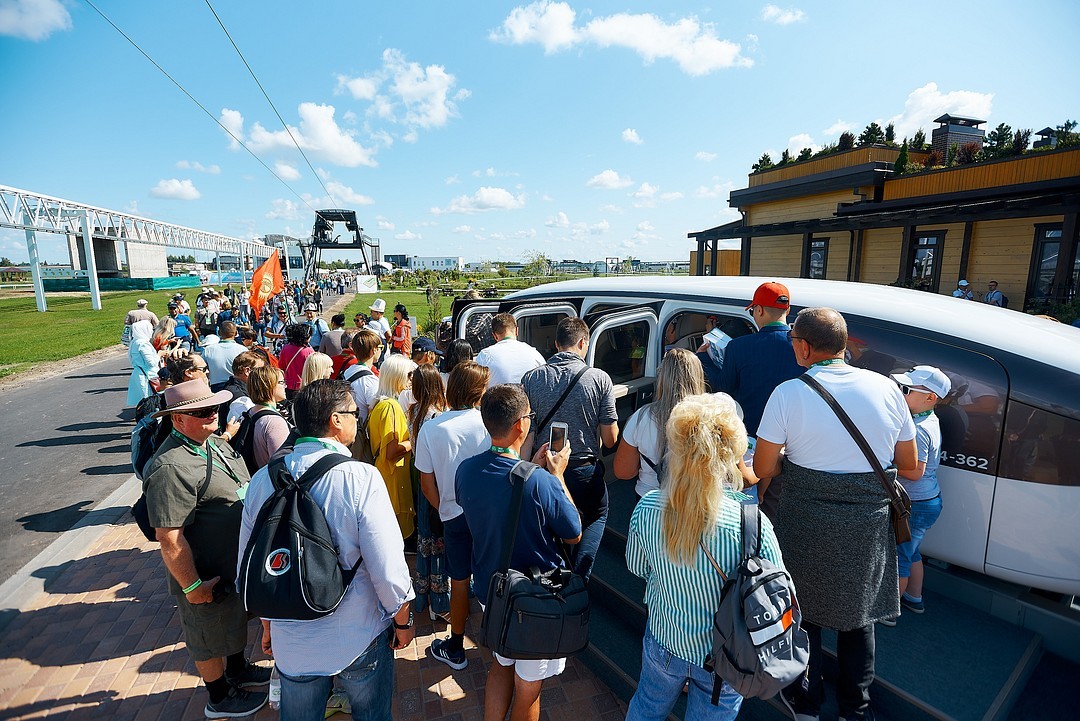 This is me (the author of this site) in an embrace :)) with a high-speed unibus in EcoFest 2019 and in the relaxation corner.

In October 2019, the construction of a research park in Sharjah (UAE) began, where string transport designed specifically for the tropical climate will be tested and certified.

His Highness Emir of Sharjah Sultan bin Muhammad Al-Qasimi visited the Sharjah Research Park and blessed the start of the first phase of SkyWay string transport testing .Take a look 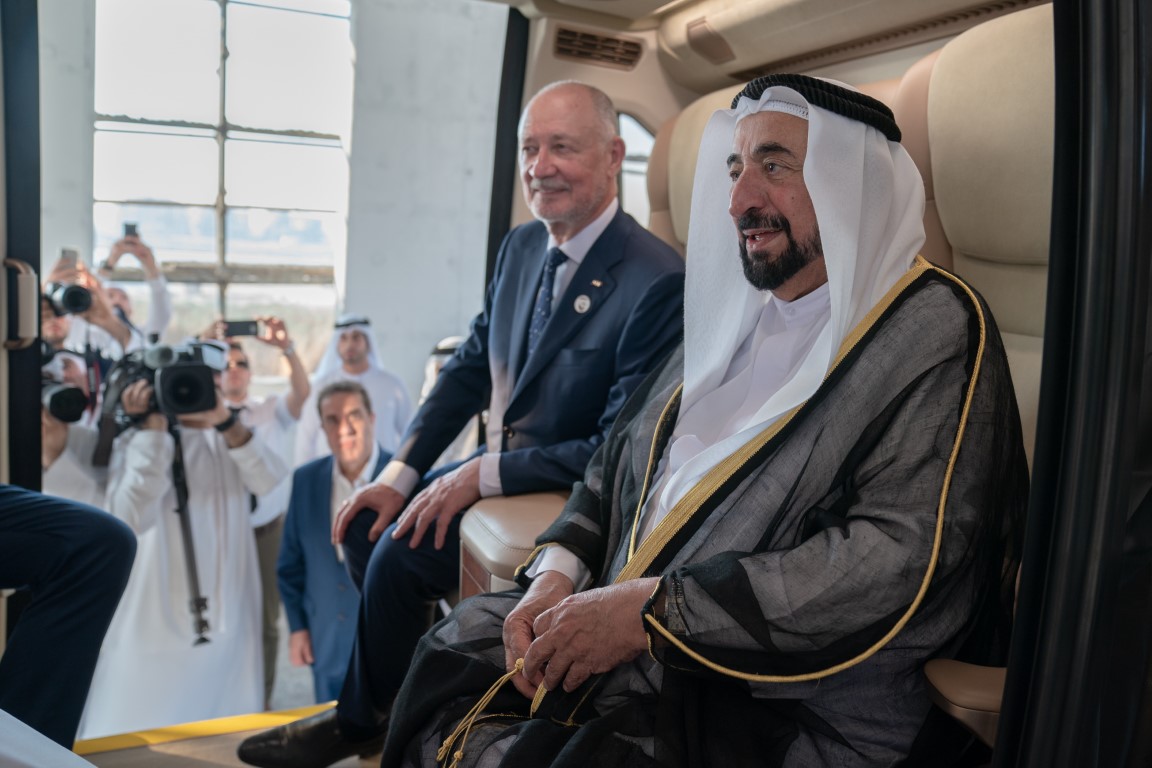 Interview in the UAE Take a look

EcoTechnoPark SkyWay is constantly visited by delegations from around the world, negotiations are underway with governments and business structures of different countries on the construction of string roads. Already today signed agreements worth $ 164 billion, which are waiting for their implementation after certification of string transport.

The construction of EcoTechnoPark is financed by the crowdfunding model - public investment. This implies the ability to invest in small amounts. Therefore, everyone can make a contribution to the development of the project, get a share and become a co-owner of the technology of the largest transport corporation of the 21st century, the possibility of a multiple increase in invested capital from the sale of shares at IPOs and dividends from every kilometer of roads built around the world!

As a result of the unification of hundreds of thousands of people from all over the world, we were able to achieve more than anticipated according to plan and for less. For each person, this is not just an opportunity to purchase shares with an additional discount, but also a chance to leave its mark on history.

"The development of the SkyWay project is direct proof that ordinary people can do any tasks! For this they must be united by a common idea. Once I was looking for sources of financing for my global project from oligarchs, presidents, kings ... But, until I turned to simple people who are not indifferent to the solution of the aforementioned problem, to the future of their children and grandchildren, didn’t move forward. I am convinced that the future is behind the crowd economy! SkyWay supports a million people in more than 200 countries. This is more than the UN member states! third of them are active investors in the project. Can you imagine how powerful it is ?! If you want to influence the improvement of the environmental situation, become a member of the SkyWay project! " Anatoli Unitsky.

Visualization of the SkyWay transport system: Take a look

SkyWay - the road to the future: Take a look

ABOUT THE OPPORTUNITY TO BECOME THE CoOWNER OF THE COMPANY, READ THE INVESTMENT PAGE

We can continue to talk endlessly about SkyWay and its achievements, but those who wish can get acquainted with all the information, daily monitor the progress of the project, the schedule and recordings of webinars by registering on the official website of Sky World Community which is translated into 20 languages.

© 2014 All rights reserved.
Create a free websiteWebnode
Website powered by Webnode
Launch your own website for free!
Start here